The needleweaving progressed quite quickly, but used a lot of thread. I am now well into the third ball of DMC perle 12 thread since I started stitching this Whitework piece.

Then it was onto the final two wide borders – first up was the longer of the two sides.

And by the end of June I was well on the way to completing the final side. 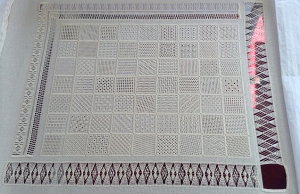 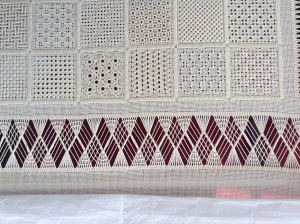 Two weeks later and all the borders were finished and as predicted previously there were an awful lot of coral knots.

Now there is just the hems to sort out.

By the end of April I had all the threads withdrawn for the borders and the hems done on six of the borders. I managed to find 9 different methods of heming the narrow borders that form two sides of the design.

There are over 400 coral knots in the longer border – and this is only a narrow border.  I don’t want to think about how many I may have to do on the wider borders!

Next up is some needleweaving.

Having finished my Saxophone it was time to start a new project on my monthly workshops with Shelley Cox. I decided to have a go at a new technique and settled on Pulled and Drawn work. I am working a sampler to include as many stitches as possible from the two techniques. My first attempt at working out a grid meant that there were going to be 99 different pulled thread techniques – a quick trip back to the drawing board cut this down to 63! Despite most of my needlework involving counting threads – it took several attempts to get the first few squares right. I kept “losing” the canvas threads when the were pulled together by my stitches.

I started this piece back in September and by March I had completed just over half of the 63 squares.

I then picked up speed and managed to finish the rest of the squares in only 2 weeks.

This meant that on my next visit to Shelley I was able to start pulling out the threads for the Drawn work borders. This took longer than expected as I needed to keep the withdrawn canvas threads in a good enough state to be able to weave them back in at the end of the borders. By my next visit to Shelley I had managed to pull out most of the necessary threads and had started to group the remaining threads together. 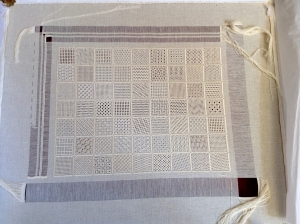